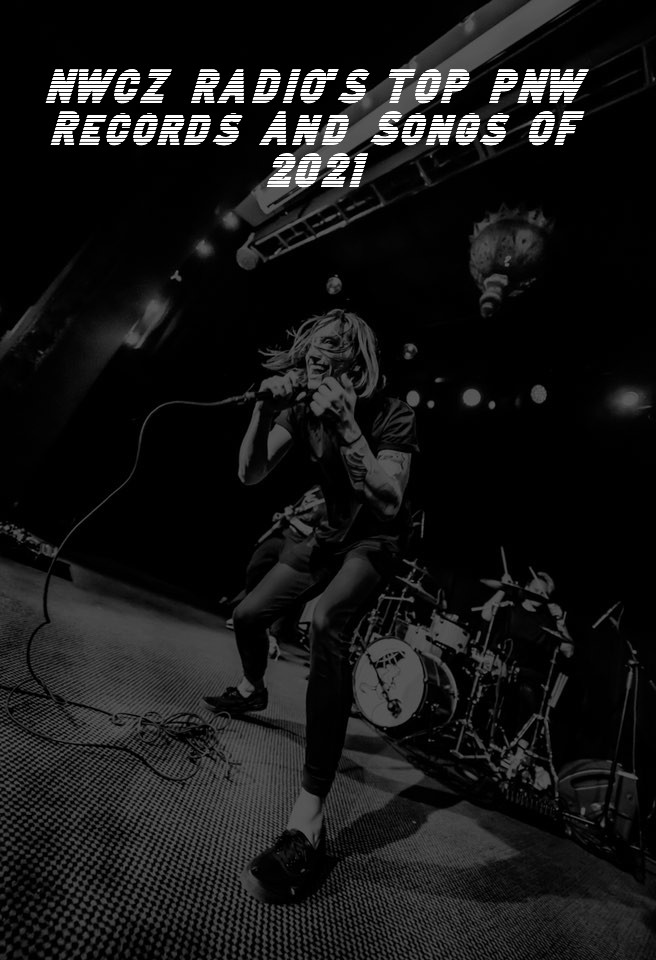 As I take the reigns here at NWCZ Radio I never want to forget about the Pacific Northwest and its diverse local music scene. As someone who spent most of their teen and adult life in the northwest hardcore and punk scene, I know it is very hard to keep track of some of the other music scenes growing around you. My time in independent radio has shown me that. 2021 was a year unlike any other patiently awaiting the aftermath of nationwide lockdowns and waiting for the moment to finally gather once again to enjoy and support live music. During that period a lot of music of all genres was unleashed onto the pnw and our music desk and here are my favorite releases in no particular order.

The word goth gets thrown around so loosely that even some of the earliest bands that helped shape the genre detach themselves from the name. I never want to be one to disrespect a genre that some have put their whole lifeforce into but one thing for certain, if there was ever a soundtrack to late nights at the cemetery Nox Novacula would be on it. The band’s 2nd LP is more dance and post-punk elements to this dreary and atmospheric deathrock band’s sound. A perfect soundtrack for the Pacific Northwest coldest nights of the year. This is a release that I believe stays true to its original intentions yet has a sound that can reach a much wider audience.

Check Out Video For Last Will And Testament Here:

The band is not from Enumclaw, what a rip-off. This Tacoma band is effortless capturing the rawest moments of the 90’s pnw sound. I’m sure a pandemic is an easy way to capture that disaffected style of alt-rock that was displayed from their Predecessors. This band is currently at the intersection of classic grunge and shoegaze.

Check out the music video for Fast N All Here:

The best kind of time capsules are ones you can personally identify with. I remember the first time  I heard plans by death cab for cutie and say anythings “Is A Real Boy” and The latest release from Good Job. brings me back to a style that started a sort mid 2000’s emo to indie rock pipeline. Catchy and Upbeat songwriting meets a melancholy sadness that identifies with the type of confusion and longing for more that you feel like a young adult that I personally identify with still in my early 30’s.

The follow-up to 2019’s “2 real” brings me back to my jr high years listening to the hip hop and r&b greats of the early 2000’s late at night on the radio. Finishline is a quick listen that brings the poppier side of r&b to the pacific northwest.

Check out the video for Lucky here:

It has been 5 years since dust Moth’s last phenomenal record, and it was worth the wait. This latest record is a beautiful blend of atmospheric hard rock that touches on vocal stylings that strongly resemble the likes of Bjork and Portishead. This band’s unique sound both pushes the boundaries that define Seattle music but presents it in such a way that is on-brand for the pnw.

Watch the video for Everything Anew here:

As far as the northwest hip-hop scene is concerned I am a complete outsider and have barely scratched the surface of what my home of 32 years has to offer. That being said I was hooked on minerals after the first line. Everything from the instrumentals provided by trussone to the vocal delivery goes down smooth but packs a punch. Accompanied by Porter Ray and the R&B stylings of phinessy.  Six songs of all no filler real deal hip-hop.

I have had an eye on this band since they first came on the scene in 2013 with their original lineup and since this group has been continually perfecting their brand of pop-punk mixing modern dance-pop with heavy driving guitars topped with infectiously melodic vocals. With this current record and sound, this band is ready to take over the world and further the pop-rock genre. Catch them on tour with This Wild Life And Broadside in 2022.

Check out the video for Right Through Me here:

Delvon Lamar Organ Trio – I Told You So

This music is the cure to get you out of your funk and into theirs. An organ-driven mixture of funk and soul that flows through your body. I am not much of a dancer and that is why I listen to this latest album alone cause it compels in one way or another, even if just a simple head nod. And topped with the bluesy guitar  Delvon Lamar organ trio is simply music for any occasion.

Listen to “I Told You So” here:

I might have a bias getting to work with this amazing artist, but Lady A’s longstanding career in the Pacific Northwest can speak for its self. When I got started with nwcz it was the authentic sound much like the music of lady a’s, that put me on to the blues and has shown me the impact the genre has made on the music industry. With this hardworking musician’s 9th studio release, The Real Lady A lets us know that nothing will stop her from making real-deal blues for the Puget Sound area and the world.

Shine – Stare Into The Sun

This release sounds like a reverb-drenched soundtrack of a 90’s road trip movie. Upbeat alt-rock with a shoegaze approach. All hailing from different hardcore bands in the Pacific Northwest such as Regional Justice Center, Seattle’s New Gods, End Of Dayz, And More, these members come together to put their own twist on a more melodic style of rock.

Listen to Stare Into The Sun Here:

Watch the Video for Shine here:

An impressive collaboration of legendary and long time Seattle and tacoma musicians that come together make a powerful brand of alt rock that few can pull off. There are few alt and metal bands that can hold my attention, but the transitions from heavy to slow and emotional the 4-6 minute songs were successfully able to hold my short attention span and are very reminiscent of the alt rock greats such as hum.

Ayron Jones – Child Of The State

If you have even been in the seattle scene for a microsecond you know ayron jones is one of seattles rising stars in the world of rock. With the same attitude that brought Jimi Hendrix to infamy ayrons debut album “Child Of The State” brings powerful blues vocals to an electrifying style of hard rock that blends classic and modern rock n roll music. His music has been tearing up the rock charts in 2021 and rightfully so. The soul that aryon delivers through his singing and playing delivers the kind of honesty that is desperately needed in main stream rock music right now.

I don’t know what it is about the pandemic that has rekindled the emo inside all of us aging punks but it’s for the past year it has been full steam ahead and I’ve been hooked to catchy sad music again. Seattle’s Dusty Cubby definitely brings a more upbeat pop-punk twist to a 90’s emo/emo revival style of sound. Also this quick listen ends us on what I believe is my favorite cover of Mr. Brightside ever. Simple and Raw, if it ain’t broke don’t fix it.

This record is a masterfully written collaboration between longstanding Tacoma producer and sound engineer Ahren Lanfor and vocal efforts from the many amazing local musicians he has helped produce for over more than a decade. Ahren creates beautiful soundscapes that meld ambient and hard rock together accompanied by an assortment of vocal styles that range from metal to hip hop and everywhere in between. This release is a true masterpiece from one of the most hardworking people in the pacific northwest music and should not be slept on.

Watch the video for orchid here.

Singles don’t make a lot of people’s lists but I think it’s important to highlight songs that stick out and have the potential for future albums. A lot of these artists put just as much work in their single and visuals as others have on their albums. Here are a few songs that stood out to us this year.

Originally released in 2020 but visuals released in 2021 so that counts in my book (To be fair, 2020 shouldn’t have even existed). Originally the vocalist for a Seattle hardcore band, Brujita XO step into a whole different genre but still brings attitude to the track mixes styles of r&b hip hop and modern pop to create Soulcalibur.

This band has worked hard to continue the pacific northwest pop-punk legacy that was created from bands such as MXPX and Amber Pacific bring the catchy party style element that was created in the late ’90s and early 2000s but still deals with the pressures and issues of growing older. This track melds in some ska elements reminiscent of Goldfinger. This band is a machine cranking out singles releases left and right and no sign of stopping anytime soon.

A dark yet dreamy vibe accompanied by a melodic vocal delivery and a rapid-fire flow makes this quick two-minute track a perfect listen.

Whenever I hear a track about skating I do what most uncoordinated people do, play tony hawk. This is a very laid-back summer drive style of hip hop song from perry porter accompanied by another Seattle local artist Lexscope.

Monsterwatch is coming at us with a noisy unhinged fusion of punk and garage rock that comes at you full speed and inventively crashes and burns (In a good way).

King Youngblood – too late, too soon

Another amazing group of musicians bringing the soul back in rock n roll to the pacific northwest. This track and video is the very common tale showing the difficult decisions most people have to face while persueing there dreams. King youngblood is bound to do great things for the Pacific Northwest music scene and beyond.

Ralph Reign – Through My Eyes

Tacomas Ralph Reign takes you on a musical journey with atompheric instrumentals and soulful voice matched with powerful visuals showcasing a true talent coming out of the 253.