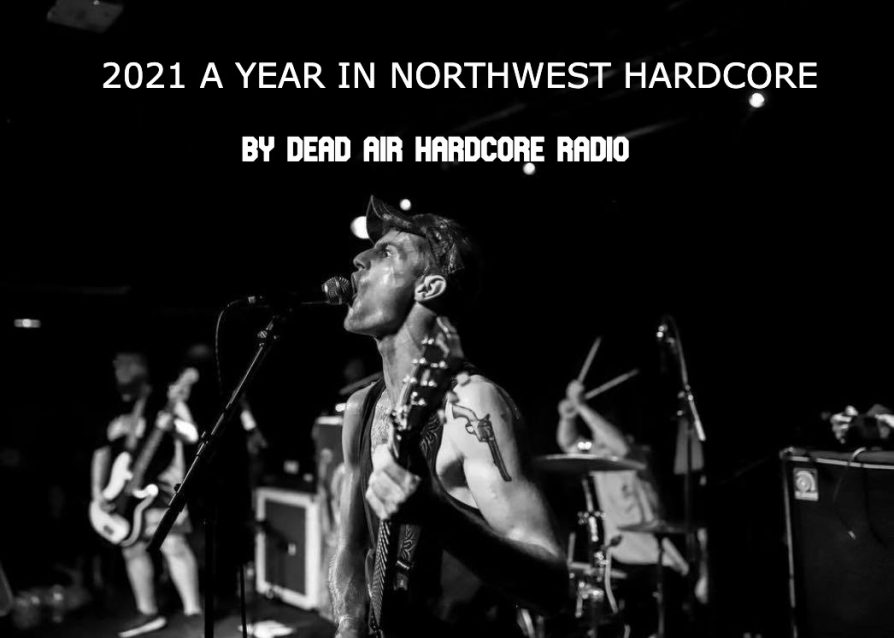 When it comes to Northwest Hardcore I think it’s like anything, it means many different things to different people depending on when and where they first were introduced. For me, northwest hardcore was always listening to Dead Air on KGRG, Going To Rainfest, Seeing my friend’s bands getting recognized for the cool stuff they do in and outside of the northwest. There are always peaks and valleys but I truly believe there are amazing things currently happening in northwest hardcore still, especially this current year. The beginning of 2020 brought a promise of the resurgence of tours coming through the Puget Sound area thanks to the help of Brain Stem Productions and after 18 months of no live shows, we finally got a chance to come back together, and the response to the experiences so far has been an amazing reminder why I always love nwhc. 2021 saw the return of Just Another Gig, as well as a ton of shows and tours in Seattle and Tacoma, packed with new kids. We also saw amazing releases from new and long-standing bands in the area and we compiled a list of all the current nwhc releases in 2021.

If there was a missed band email me at deadairnwcz@gmail.com

A big thank you to Zack And Brainstem Productions,Tom At Real Art Tacoma, Everyone At Vera Project, Hammerhead House, Brightside Social Club, Boise Crew, and Everyone who made Northwest Hardcore Happen in 2021

This Boise bands sound live energy and overall presence is top tier. If you have haven’t been paying attention to ingrown one the last few years you are seriously messing up. Their latest LP titled “Gun” is heavy fast and gets to point. Literally sounds like a gun repeatedly hitting you in the face. This in my opinion is “Thee” Northwest Hardcore band.

Check out video for Waste here:

Check out GUN on Bandcamp Here:

There is no denying that dying wish had a hell of a 2021. With their debut LP on sharp tone records titled “fragments of a bitter memory”this band has begun their world takeover. For Years the members of this band have been putting on for the Portland area and help build and maintain a vital piece of northwest hardcore. Their hardworking has finally paid off with an amazingly written LP reminiscent of the early Killswitch engage records with intensity of bands like Martyr AD. They have preformed at furnace fest played all over the country with bands like silent planet and Acacia Strain And its only up from here.

Tacomas most loyal, bringing life to the northwest with New York inspired riffs and a whole lot of attitude. The band recorded two releases in 2021 with Their “Seeing Red,Feeling  Blue” tape And their self titled 3 song release. The spirit of Tacoma hardcore lives on.

Check out By All Meanz at JAG 2 here:

Check out the BAM bandcamp here:

New Seattle Hardcore, Jose and Casey from every movie is good giving you Fast ripping , real deal punk hardcore.Their debut tape cam out in early December 2021 that followed with a tour from Milwaukees Big Laugh. With the members having their  hand in a lot of projects in Seattle it’s hard to tell how often this band will be active but in the mean time listen to this is a mean hardcore tape made for mean people.

Bad Freaking ass, Casey Shaw of the scare, Odd Man Out,Instant death,Crawl Space and most importantly every movie is good podcast giving you heavy ass hardcore you can fight your middle school bully to. First show coming at JAG Volume 3.

Check out the demo here:

Out of the ashes of Seattle metalcore group Motion  Comes Lilith, A three piece Metalcore Group five years in the making with a sound in the Vein of The first Code Orange LP that also pulls from a whole variety of late 90’s and 2000’s metal/hardcore influences. From abrasive hate breed style mosh parts to more chaotic Dillinger and Converge inspired Metalcore. Garret Hilty and band put 110 percent into what they write which creates something amazing for northwest metal and hardcore which I believe deserves attention from a much wider audience.

Denial Of Life has been getting the local love they deserve putting on for tacoma with raw and energetic style of crossover and great live show.The band put out a two song release this year titled “Scheming To Suffer” and I expect more great things for this band in 2022.

Check out Scheming to Suffer here:

New Death Metal and Crust Infused Hardcore from tacoma started this year. Ex members of tiger hawk, slog and more. Got their official start around august and have played a few shows between tacoma and Seattle in the later half of this year.

After 6 years since their last live show Tacomas Open Fire! Returned in 2020 to rerecord their built to abandon ep and decided to continue on with record their first two original song since their 2012 I Am The Curse LP. Crushing Metalcore With Melodic Influences for fans of Misery Signals And Counterparts. No word on any future live performances yet but the legacy of open fire lives on with these new recordings.

A new vocal effort from Rusty of Safe And Sound, HockeyxFight,Odd Man Out, Crooked Cross and more. For fans of the other uniform choice record and hardcore punk with tons of solos. First show coming soon.

A new melodic group from Portland for fans of rev summer and bands like praise. Catchy Guitar mixed with intentional and emotional lyrics, whats not to like? They self released a demo earlier in the year then released a self titled EP through Exinction Burst records in the Fall followed by supporting a Northwest run in early december with Faim and Change.

Members Of Rookie Town and Traditions with some elements of Histories Era Go It Alone mixed with mushier style that is reminiscent of the early trapped under ice material. This band recorded their Debut 7” titled “Closed Forever” in April 2020 and at the end of that year the band was signed to Safe Inside records. This year they finally got to preform their first show in Seattle and there is more on the way for 2022.

Following up from their 2020 release titled “We Don’t Forget”, Vancouvers Punitive Damage Returns with three songs with Mean, Fast Ripper Harder Tunes With an Intense and Piercing Vocal Delivery from singer Steph Jerkova on there latest recording title “Strike Back”.

Listen to Strike Back here:

New Heavy ass beater straight edge band from Portland coming at you with ski masks and a late 90’s beatdown kind of attitude. Straight Edge tunes from people who really hate cops and 9-5 jobs, what’s not to like?

New Boise band on words on fire for fans of foundation. Awesome energy from this new band that you don’t want to miss out on. They will play at just another gig in Tacoma in late January.

Previously called Fucked And Bound, Filth is Eternal continues to bring raw chaotic energy to their music.  From D-beat to grind to more traditional hardcore This band has carved a sound that is unmatched in the Pacific Northwest. The band released their follow up to 2018’s “Suffrage” this august with “Love Is A Lie, Filth Is Eternal”

Check out video for On A Rake here:

Hardcore Legend John Pettibone Of Undertow And Himsa has been making amazingly crushing post-metal/hardcore with  Heiress for the better part of a decade furthermore cementing his status as an integral part of the Seattle music scene. In December Heiress released their 4th full length titled Distant fires. This is not for the hardcore fans who enjoy brevity but with songs up to seven-plus minutes long. Heiress has the uncanny ability produces song to capture the attention of the most impatient listeners.

Featuring members of long standing current hardcore bands up and down the west coast with members of dying for it, Blue Monday,Cutting Through and More. A youth crew band that stays true to their straightforward hardcore and youth crew roots while singer Rikki stays true lyrically to her Chicana roots. The Portland has played locally with another appearance at Just Another Gig Volume Three at the end of January.

Former members of Safe And Sound, Clarity, And More. From bands like go it alone to growing strong, keep it clear, and more, this band is delivering the brand of fast straight-ahead punk hardcore that only the Pacific Northwest can deliver.

Check out the latest release here:

If you don’t know sidetracked you don’t know Tacoma music, plain and simple. Over the past 20 years jay and sidetracked have been producing some of the fastest bursts of music known to man. I will never forget filming them at rainfest 2010 still not knowing if they played 15 or 40 songs. This year alone sidetracked produced 9 releases. If you don’t got a lot of time to listen to music, sidetracked has a solution for that.

Check out a good amount of the Sidetracked discog here:

Explosive rock and roll energy fused to raw punk rock. Pulling from the early stylings of the stooges and the damned, lysol still succeeds at staying in the present by not lacking and putting everything they have to give right in your face. The bands debut release “Soup for my family” is a no skip album for punk fans.

Check out the Debut LP here:

If you are paying attention to current hardcore in any capacity then you should quite familiar with Regional Justice Center. Intentional, Blistering and Harsh all wrapped 13 min LP of fast hardcore filled with extremely subject matter. When i got to see this band live in seattle it was the first hardcore show i got to see 18 months and i got to see the impact this band has made in the northwest and newest generation of hardcore listeners.

Listen to Crime And Punishment here:

An on again off again project from ex members of Furious Styles and Red Light Murder that has finally take shape with Blunt Forces latest EP Raised on destruction. Giving a style of cross over that reminds me of early cruel hand as well as Power Trip and Municipal Waste. The band has played a hand full of shows in the tacoma/seattle area and is for fans of throwing up the metal horns.

Watch the video for Raised On Destruction here:

Check out the EP here:

When it come to the world of the current hardcore to death metal pipeline we have alot of bands that get in where they fit in and straight up death metal to mostly hardcore audiences. I am definetly guilty of falling down this pipeline and love the crushing new songs from boise idahos grave titan. With all the hype from current boise bands such as Ingrown And Rejection Pact this is band you don’t want to sleep on.

Check out video for The Rat Is Real here:

Check out the latest release here: